Indiana Business Journal has released this year’s Fast 25, a list of the fastest-growing private companies in Indianapolis. This annual list ranks companies based on their revenue growth over a three-year period. SupplyKick LLC landed at #4 on this year’s list.

With revenue growth of 205 percent between 2014 and 2016, SupplyKick has become a top seller on Amazon, offering simplified solutions for brands seeking to increase their online marketplace sales. The company now works with nearly 100 partners in the home and garden, automotive, tools and hardware, and travel categories.

“We’re extremely proud of what this team has accomplished in such a short period of time,” said SupplyKick CEO Josh Owens. “Everyone at SupplyKick is honored to receive this designation and excited for what the rest of 2017 will bring.”

The full list of this year’s Fast 25 can be viewed on Indiana Business Journal’s website, including an interview with Owens. This news comes on the heels of SupplyKick’s successful Prime Day, in which the company saw a 189 percent sales increase over 2016. 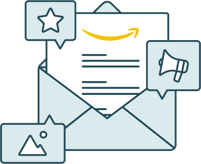 Stay up to date with all things Amazon.

Sign up to receive our newsletter for growth strategies, important updates, inventory and policy changes, and best practices.